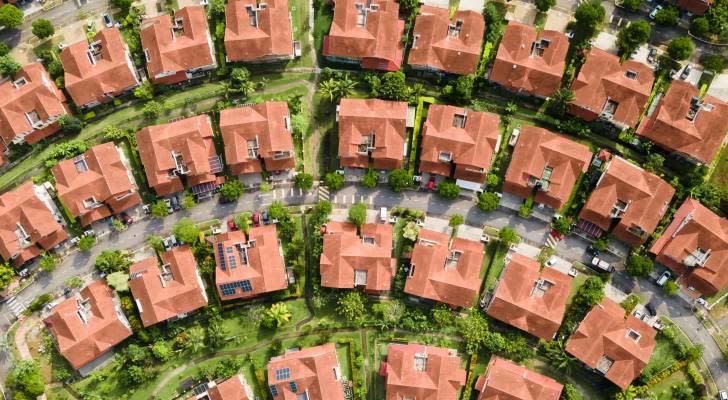 Mortgage rates are slightly lower, with refinances available at less than 3% and even 2%

Mortgage rates fell, a week after their skyrocketing, according to a closely watched survey. The setback gives homeowners more time to lock in low refinance rates.

Borrowers who shop find 30-year refi loans at rates well below 3% and 15-year mortgages at even lower rates.

But interest rates are expected to rise in the weeks and months to come, which means the days of super cheap refinance rates are numbered.

The rates on America’s most popular home loan, the 30-year fixed-rate mortgage, fell to an average of 2.86% last week, from 2.87% a week earlier, reported on Thursday. mortgage giant Freddie Mac. The typical rate remains relatively close to the all-time low in January of 2.65%.

Mortgage rates had risen sharply in the previous week, but stabilized as a disappointing US retail sales report caused US Treasury bond interest rates to stagnate, says economist George Ratiu principal at Realtor.com. Rates tend to follow the yield on 10-year treasury bills.

Fifteen year mortgages are a popular choice for refinancing loans. And because of the way averages work, 15-year loans can be found at rates below the current average of 2.16%, or around 2%, or even less.

Short-term home loans have much higher monthly payments than 30-year mortgages. But borrowers pay off their loans faster and can save a lot on interest.

The cost of 5/1 variable rate mortgages, or ARMs, has gone down.

A 5/1 ARM last week had an average introductory interest rate of 2.43%, down from 2.44% the week before, Freddie Mac says. At the same time last year, 5/1 ARMs were considerably more expensive, with an average rate of 2.91%.

Variable rate mortgages have two phases. During the first, you pay a fixed interest rate which is usually lower than what you would get with a 30 year fixed rate loan. Once this period has elapsed, your ARM rate will adjust, up or down, at regular intervals.

An ARM 5/1 would charge you the same mortgage rate for the first five years. After that, your rate will be adjusted every (one) year.

Mortgage rates are taking a downtime, but borrowers shouldn’t be complacent.

As it sees more signs the economy is improving, the Federal Reserve should start withdrawing its emergency policies that have kept interest rates at historically low levels during the pandemic, Realtor’s Ratiu said .

â€œThis means that we can expect rates to resume their mid-March hike above 3.0% closer to the end of the year and into 2022,â€ he said.

Freddie Mac recently predicted that 30-year fixed rate mortgages will average 3.4% by the end of 2021 and then continue to rise through 2022, on the verge of averaging around 3.8% by the end of next year.

So time may be running out for homeowners to reduce their mortgage payments by refinancing them. A recent Zillow survey found that more than three-quarters of homeowners had never refinanced ultra-low rates in the past year; nearly half of those who have done so are saving $ 300 or more per month.

If you’ve delayed refinancing but decide it’s finally time to stop procrastinating, follow these steps to get the lowest mortgage rate possible.

Mortgage lenders may not want to work with you if you already have a lot of high interest debt, including credit cards. Consider transferring these balances into a low interest debt consolidation loan to lower your interest charges and get rid of your debt faster.

Once it’s time to shop for a mortgage, collect offers from multiple lenders to find the best rate for your area and for someone with your credit profile. Studies by Freddie Mac and others have shown that comparing five or more offers is key to getting the most favorable rate on a mortgage.

Then a little more comparison could help you find a better deal on your home insurance that could save you hundreds of dollars a year.

This article provides information only and should not be construed as advice. It is provided without warranty of any kind.